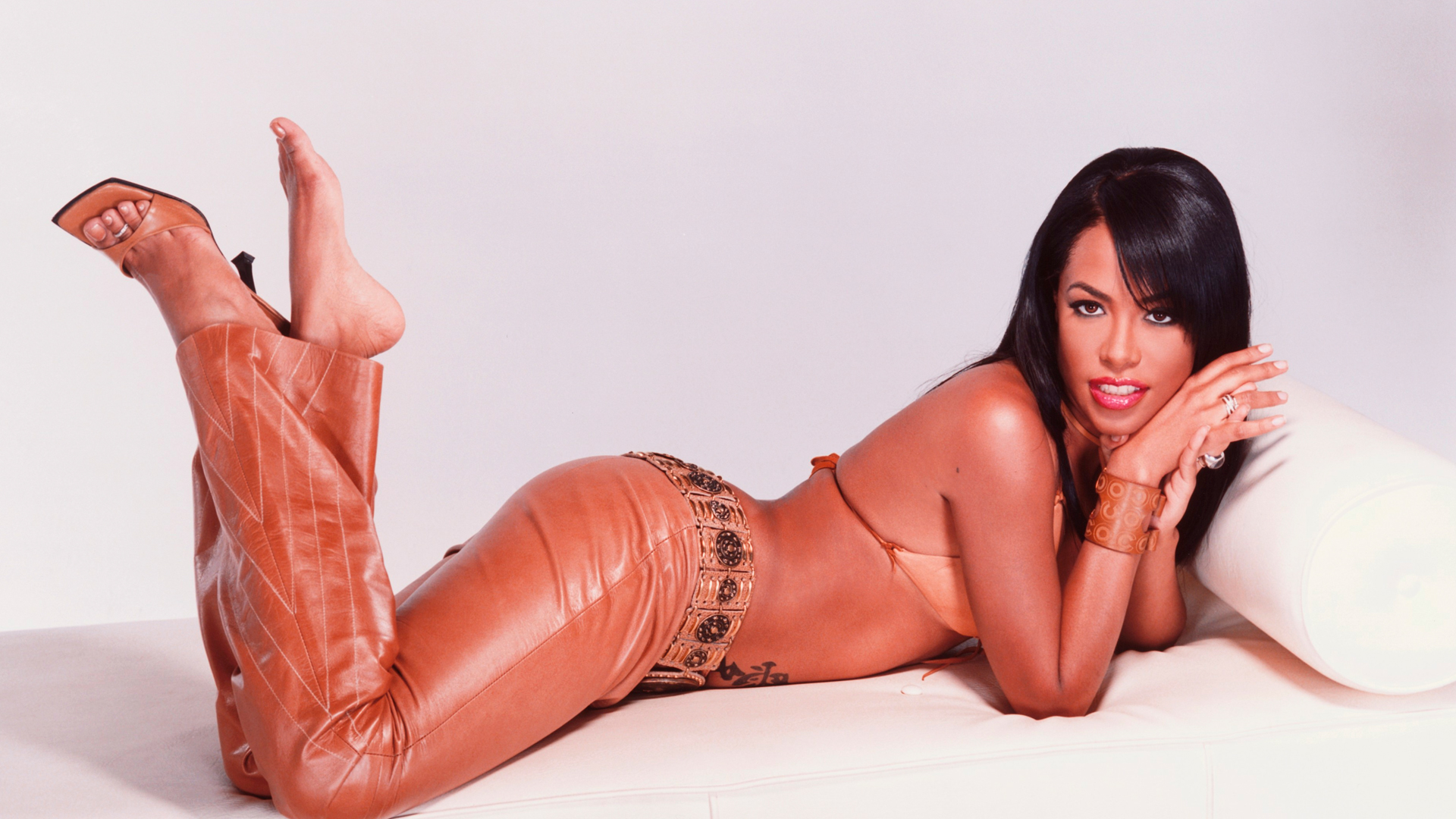 When considering Aaliyah’s track record, it’s befitting that her name means “The highest, most exalted one, the best.” Her parents, Diane and Michael, decided on the name based on the high hopes and expectations they would have if they had a daughter. Her success as both a recording artist and actress actually makes the name of a self-fulfilling prophecy. Aaliyah made her dreams come true. At 22, she not only had a very successful recording career but also established herself as a motion picture actress and an accomplished business woman.

From an early age, Aaliyah found satisfaction in her music. When she didn’t win the youth vocal competition on “Star Search” as a preteen, she didn’t let it deter her from continuing to sing. In fact, at age 11, she landed a five-night stint performing with Gladys Knight in Las Vegas. Born in Brooklyn, New York, she was raised between Detroit and New York and eventually became a client with Abrams Artists. She graduated from the Detroit Performing Arts High School in 1997 with a 4.0 GPA. She credits her educational success to the support from her family, her mother (who was a teacher that home schooled her), Dr. Sylvia Twyman, Dr. Denise Cotton, the Education Guidance Center, Dr. David Snead (Superintendent of Detroit Schools who approved Aaliyah’s program with Dr. Cotton and her parents) and Jennifer Vandenbrooks who also assisted in her education. College was definitely in the plans.

“When I told my parents that I wanted to embark along this path,” says Aaliyah, “they were with me all the way. They were the ones who shuttled me back and forth to my vocal lessons, dance lessons, private guitar, play rehearsals at Gesu Elementary School and they even saw to it that the sets for the plays were transported to Mary Grove College in Michigan. What could be more important?”

In 1994, at the age of 14, Aaliyah released her first album, Age Ain’t Nothing But A Number. It was an instant success. The first single, “Back And Forth,” was a Top 5 hit on the Billboard Hot 100 and a No.1 R&B song. The follow up single, a remake of the Isley Brother’s “At Your Best (You Are Love)” reached Top 10 on the Billboard Hot 100 and was No. 2 at R&B radio. “I still remember how nervous I was right before “Back And Forth” came out,” she says. “I kept wondering if people would accept it. When it went gold, I had my answer, and it was just such an incredibly satisfying feeling.” The acceptance of her music inspired other female teen singers to follow in her footsteps. Her taste in fashion still influences her fans and other artists. Teen Vogue once wrote Aaliyah set the prototype for the young female artist of the ‘90s.

Her trademark baggy pants and oversized shirts simply reflect the sense of style she developed as a child. She always loved wearing her father and brother’s clothes. She said she was never going to wear a dress or carry a purse. As we know, that eventually changed. Just remember The MTV Awards, when she won her award and took center stage in her Roberto Cavalli dress with her beloved brother. They both were wondrous.

In 1996, Aaliyah released her second record, One In A Million. The first single, “If Your Girl Only Knew,” went double platinum and contains Timbaland’s signature syncopated beats and Missy “Misdemeanor” Elliott’s poignant lyrics. “4 Page Letter” and “Hot Like Fire” were also well received. “I love working with Timbaland,” Aaliyah says. “He understands what I can do and always wants to try new things. We have a great chemistry, we are musical soul mates.” Rashad wrote the video treatment for “4 Page Letter” in two hours while studying at Hofstra University.

Jermaine Dupri, Rodney Jerkins, J. Dibbs, Daryl Simmons, Kay-Gee, Vincent “V.H.” Herbert, and Craig King were also involved with producing One In A Million. The album was multi-platinum and an international hit. Aaliyah performed throughout Europe, Japan, and South Africa. In Tokyo, concert goers sang the words to all of her songs. In Paris, eager fans chanted her name before she took the stage.

In 1998, Aaliyah had a huge hit with “Are You That Somebody” from the Dr. Doolittle soundtrack. Produced by Timbaland, the song was infectious, known for it’s sampling of a baby crying. Fans particularly enjoyed the classy Flamenco dance moves in the video that was choreographed by Fatima. They actually learned the dance by studying movies and going to a flamenco specialist. Also that year, Aaliyah performed “Journey To The Past” for the motion picture Anastasia. “Journey To The Past” was nominated for an Academy Award for Best Song. Aaliyah performed it on The Academy Awards Show that year, the year of Titanic.

Aaliyah’s motion picture debut in Romeo Must Die, produced by Joel Silver for Warner Brothers, is spectacular by any standards. Co-starring Jet LI, the film was a box office success and has led to Aaliyah’s huge hit record, “Try Again.” The Romeo soundtrack sold millions of copies and spent weeks atop the Billboard soundtrack charts. What makes this even more extraordinary is that she was executive producer for the soundtrack. Aaliyah also had two other cuts on the record including one with DMX.

Aaliyah was working on her third studio album and selecting her next film roles from the many offers she was receiving. She planned to continue her collaboration with Timbaland and was also hoping to work with some more outstanding producers and artists.

“I studied for one month in preparation for the fight scene in Romeo. My brother, Rashad, and I took some martial arts classes when we were younger so I had some knowledge of the process. Jet Li is really amazing. He’s such a natural. He just came in and did his part. It only took three days to shoot. At the MTV Movie Awards this year, a lot of media asked me if there were any categories that I would like to see added to the awards. Actually, I would: Best hug and dance scene. In the movie, Jet Li and I never have a kissing scene, but we do have a hot dance sequence. I will never forget the RMD (Romeo Must Die) team and their kindness towards me, my brother (who was able to be on set during his break from school) and to my mom and dad.”

Following up on her box office success in Romeo Must Die, Aaliyah starred alongside Stuart Townsend, Vincent Perez and Lena Olin in the 2001 film The Queen of the Damned, directed by Michael Rymer. Aaliyah played the title role of Akasha, in the supernatural adventure based on the third novel in the Anne Rice’s Vampire Chronicles. Aaliyah read all the chronicles and was intrigued by vampiric information. She even had the opportunity to talk to Anne Rice who was pleased that she received the role. Aaliyah worked very hard for this role with her speech instructor and mime specialist for movement both were referred to her by her beloved acting coach Harold Guskin who was on the set for RMD. Joann and WB Baron worked with her on the set for Queen of the Damned.

Aaliyah’s last studio album reflected her growth as a person and as an entertainer. The self-titled album Aaliyah, released in July 2001, debuted at number 2 on the US charts and sold over 2.4 million albums worldwide. Aaliyah featured the smash singles “We Need a Resolution,” “More Than A Woman,” and “Rock The Boat”.

From a film career standpoint, Aaliyah had obtained roles in “Matrix Reloaded and Revolutions,” “Honey”, “Sparkle” (she met with Whitney Houston whose company was producing “Sparkle”), and a true story that was based on an interracial love. She actually pitched it with one of her agents from CAA to Fox Searchlight. It was accepted with Aaliyah in the lead role! Unadulterated Business savvy at 22!

Aaliyah continues to have an impact on the world after her passing that fateful day in 2001. She was a person of virtue, honor, hard work, and love. She was a unique individual who gave all of herself in whatever she did. Whether it was charity work, singing, acting, time with friends, signing autographs, Aaliyah lived her life with a smile on her face and love in her heart. To her family, friends, loved ones, and fans worldwide, Aaliyah will be missed but will always be remembered. A true angel in every sense of the word, she lives now in our minds, our hearts and in the way we all live our lives; in her name we strive to be the best and make our world a better place.

With Aaliyah In Our Hearts!!! Always…

In its fourth decade of licensing and clearing intellectual property rights, CMG Worldwide is the recognized leader in its field. CMG helps you navigate through and effectively manage the licensing process, while providing peace of mind that you have addressed all the outstanding clearance concerns.